For anyone using containers, Docker is a wonderful development platform, and Kubernetes is an equally wonderful production platform. But how do we go from one to the other? Specifically, if we use Compose to describe our development environment, how do we transform our Compose files into Kubernetes resources?

This is a translation of an article initially published in French. So feel free to read the French version if you prefer!

Before we dive in, I’d like to offer a bit of advertising space to the primary sponsor of this blog, i.e. myself: ☺

In April, I will deliver three training sessions in Paris (in French). There will be getting started with containers, deploying apps with Kubernetes, and Kubernetes administration and operations. French is not your thing? I got you covered with Kubernetes for administrators and operators, a two-day tutorial in June, at the O’Reilly Velocity conference in San Jose (CA). If you know someone who might be interested … I’d love if you could let them know! Thanks ♥

What are we trying to solve?

When getting started with containers, I usually suggest following this plan:

When you reach this stage, you’re already leveraging containers and benefiting from the work you’ve done so far, because at this point, anyone (with Docker installed on their machine) can build and run the app with just three commands:

Then, we can add a bunch of extra stuff: continuous integration (CI), continuous deployment (CD) to pre-production …

And then, one day, we want to go to production with these containers. And, within many organizations, “production with containers” means Kubernetes. Sure, we could debate about the respective merits of Mesos, Nomad, Swarm, etc., but here, I want to pretend that we chose Kubernetes (or that someone chose it for us), for better or for worse.

So here we are! How do we get from our Compose files to Kubernetes resources?

At first, it looks like this should be easy: Compose is using YAML files, and so is Kubernetes. 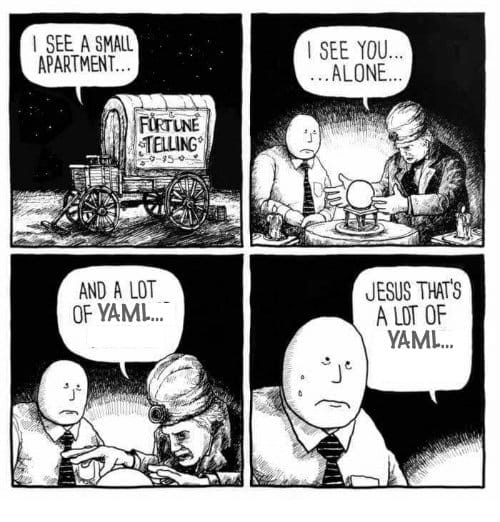 There is just one thing: the YAML files used by Compose and the ones used by Kubernetes have nothing in common (except being both YAML). Even worse: some concepts have totally different meanings! For instance, when using Docker Compose, a service is a set of identical containers (sometimes placed behind a load balancer), whereas with Kubernetes, a service is a way to access a bunch of resources (for instance, containers) that don’t have a stable network address. When there are multiple resources behind a single service, that service then acts as a load balancer. Yes, these different definitions are confusing; yes, I wish the authors of Compose and Kubernetes had been able to agree on a common lingo; but meanwhile, we have to deal with it.

Since we can’t wave a magic wand to translate our YAML files, what should we do?

I’m going to describe three methods, each with its own pros and cons.

If we’re using a recent version of Docker Desktop (Docker Windows or Docker Mac), we can deploy a Compose file on Kubernetes with the following method:

In simple scenarios, this will work out of the box: Docker translates the Compose file into Kubernetes resources (Deployment, Service, etc.) and we won’t have to maintain extra files.

If we’re using Docker Enterprise Edition, there is an easy solution: UCP (Universal Control Plane) can do the same thing, but while targeting a Docker EE cluster. As a reminder, Docker EE can run on the same cluster, side-by-side, applications managed by Kubernetes, and applications managed by Swarm. When we deploy an app by providing a Compose file, we pick which orchestrator we want to use, and that’s it.

(The UCP documentation explains this more in depth. We can also read this article on the Docker blog.)

This method is fantastic if we’re already using Docker Enterprise Edition (or plan to), because in addition to being the simplest option, it’s also the most robust, since we’ll benefit from Docker Inc’s support if needed.

Alright, but for the rest of us who do not use Docker EE, what do?

There are a few tools out there to translate a Compose file into Kubernetes resources. Let’s spend some time on Kompose, because it’s (in my humble opinion) the most complete at the moment, and the one with the best documentation.

We can use Kompose in two different ways: by working directly with our Compose files, or by translating them into Kubernetes YAML files. In the latter case, we deploy these files with kubectl, the Kubernetes CLI. (Technically, we don’t have to use the CLI; we could use these YAML files with other tools like WeaveWorks Flux or Gitkube, but let’s keep this simple!)

However, sometimes, the translation produced by Kompose will be imperfect, or even outright broken. For instance, if we are using local volumes (docker run -v /path/to/data:/data ...), we need to find another way to bring these files into our containers once they run on Kubernetes. (By using Persistent Volumes, for instance.) Sometimes, we might want to adapt the application architecture: for instance, to ensure that the web server and the app server are running together, within the same pod, instead of being two distinct entities.

In that case, we can use kompose convert, which will generate the YAML files corresponding to the resources that would have been created with kompose up. Then, we can edit these files and touch them up at will before loading them into our cluster.

This method gives us a lot of flexibility (since we can edit and transform the YAML files as much as necessary before using them), but this means any change or edit might have to be done again when we update the original Compose file.

If we maintain many applications, but with similar architectures (perhaps they use the same languages, frameworks, and patterns), then we can use kompose convert, followed by an automated post-processing step on the generated YAML files. However, if we maintain a small number of apps (and/or they are very different from each other), writing custom post-processing scripts suited to every scenario may be a lot of work. And even then, it’s a good idea to double-check the output of these scripts a number of times, before letting them output YAML that would go straight to production. This might warrant even more work; more than you might want to invest.

This table (courtesy of XKCD) tells us how much time we can spend on automation before it gets less efficient than doing things by hand.

I’m a huge fan of automation. Automation is great. But before I automate something, I need to be able to do it …

The best way to understand how these tools work, is to do their job ourselves, by hand.

Just to make it clear: I’m not suggesting that you do this on all your apps (especially if you have many apps!), but I would like to show my own technique for converting a Compose app into Kubernetes resources.

The basic idea is simple: each line in our Compose file must be mapped to something in Kubernetes. If I were to print the YAML for both my Compose file and my Kubernetes resources, and put them side by side, for each line in the Compose file, I should be able to draw an arrow pointing to a line (or multiple lines) on the Kubernetes side.

This helps me to make sure that I haven’t skipped anything.

Now, I need to know how to express every section, parameter, and option in the Compose file. Let’s see how it works on a small example!

This is an actual Compose file written (and used) by one of my customers. I replaced image and host names to respect their privacy, but other than that, it’s verbatim. This Compose file is used to run a LAMP stack in a preproduction environment on a single server. The next step is to “Kubernetize” this app (so that it can scale horizontally if necessary).

Next to each line of the Compose file, I indicated how I translated it into a Kubernetes resource. In another post (to be published next week), I will explain step by step the details of this translation from Compose to Kubernetes.

This is a lot of work. Furthermore, that work is specific to this app, and has to be re-done for every other app! This doesn’t sound like an efficient technique, does it? In this specific case, my customer has a whole bunch of apps that are very similar to the first one that we converted together. Our goal is to build an app template (for instance, by writing a Helm Chart) that we can reuse, or at least use as a base, for many applications.

If the apps differ significantly, there’s no way around it: we need to convert them one by one.

In that case, my technique is to tackle the problem by both ends. In concrete terms, that means converting an app manually, and then thinking about what we can adapt and tweak so that the original app (running under Compose) can be easier to deploy with Kubernetes. Some tiny changes can help a lot. For instance, if we connect through another service through a FQDN (e.g. sql-57.whatever.com), replace it with a short name (e.g. sql) and use a Service (with an ExternalName or static endpoints). Or use an environment variable to switch the code behavior. If we normalize our applications, it is very likely that we will be able to deal with them automatically with Kompose or Docker Enterprise Edition.

(This, by the way, is the whole point of platforms like OpenShift or CloudFoundry: they restrict what you can do to a smaller set of options, making that set of options easier to manage from an automation standpoint. But I digress!)

Moving an app from Compose to Kubernetes requires transforming the application’s Compose file into multiple Kubernetes resources. There are tools (like Kompose) to do this automatically, but these tools are no silver bullet (at least, not yet).

And even if we use a tool, we need to understand how it works and what it’s producing. We need to be familiar with Kubernetes, its concepts, and various resource types.

This is the perfect opportunity to bring up the training sessions that we’re organizing in the coming months!

There will be three sessions in French in April in Paris, and one in English in June in San Jose (CA).

I can also deliver private training, customized to your team. Please get in touch if you’re interested!

If you wonder what these training sessions look like, our slides and other materials are publicly available on http://container.training/. You will also find a few videos taken during previous sessions and workshops. This will help you to figure out if this content is what you need.

In the second part of this article (to be published next week), we’ll dive into the technical details and explain how we adapted this LAMP application to run it on Kubernetes!